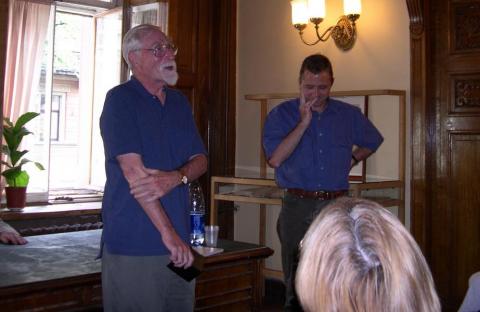 How can one not wish one had spent more time with Don Johnson?  For so many of us, he was the gateway into the Nabokov world, even when he was not the first Nabokov scholar we had read.  As one of the last people to write a dissertation in the pre-“Web” era, when the most exciting things online were email and the ability to find out, through dial-up and remote Telnet login, what was contained in almost any library in the world, I greeted Nabokv-L like manna. It was doubly important to me, because just at the moment it appeared, I had just exiled myself from my PhD advisor and home campus for family reasons. Without Don’s new venture, I would have continued to feel intellectually alone, homeless even, but instead I felt constantly embraced and inspired by the world he had created. Thanks to that time, I’ve always felt not just grateful to Don, but very much aware that my work is a direct consequence of his generosity and his open-hearted, quick-witted passion for knowledge and its sharing.

It was an honor when, during some lovely time we had together in St. Petersburg around the Nabokov Museum conference in July 2005, he chose me and Susan Elizabeth Sweeney to continue his work at Nabokv-L, and it hardly needs stating that he gave us full support in everything we did; but he also took his hands fully off, so that we could lead the list in our own way—perhaps even in ways he did not approve of, but he never even hinted at any disappointment.  As the Listerv technology got caught in the crossfire between spam-bots and filters, it became harder for that format to serve the entire audience; even in Don’s last few years at the helm, it was hard to satisfy all participating factions, and he used to complain that contributions had declined too much, and would urge some of us to send in a tidbit or two.  I suspect that Don was not able to take stock of the newest instar of Nabokv-L, now as part of TheNabokovian.org, but from what I’ve seen, I think it has reinvigorated the level of discussion and interaction to something close to what used to exist in the List’s heyday, under Don’s warm guidance.  And that never-ending conversation, in the spirit of Don’s curiosity so beautifully evoked in Brian Boyd’s memorial essay, is the most fitting tribute we, his thankful followers, can continue to pay him.