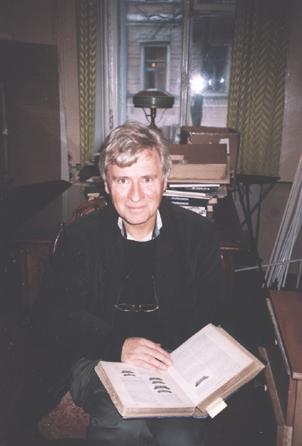 Dieter Zimmer (1934-2020): noble, wise, driven by truth-seeking, mercilessly attentive to detail, an intellectual of the highest carat, a man of honour, a writer from God. He interviewed Nabokov several times and translated him into German, becoming the editor of VN's works at Rowholt Verlag in 1989. His Nabokov's Berlin (2001) and A Guide to Nabokov's Butterflies and Moths, his unprecedented website dedicated to VN's family and haunts, and his Lolita travelogue are and will remain the golden standard of Nabokov studies. I met Dieter in 1999 at the Nabokov Museum, where this picture was taken, welcomed him again to St. Petersburg in 2003, and remained in on-and-off contact with him over these years, marvelling at the wealth of knowledge he possessed, his eagerness to share what he knew and discovered, his kindness, his wit. I remember how joyfully Dieter plunged into VN's own Natural History of British Butterflies and Moths by Newman the first time he visited us at 47 Bolshaya Morskaya Street. His excitement was contagious: curators and staff gathered around, marveling at the images Nabokov painted by hand as a child, listening to explanations from the man who had chased—in a scholarly sense—every species Nabokov collected, every lepidopterological publication he authored, every lep-related allusion in VN's novels and short stories. We took him to Rozhdestveno and the Russian Geographic Society (for some fact-checking related to Godunov-Cherdyntsev Sr.'s trip across Central Asia), while the museum organizers and the Goethe Institute folks were finishing preparations of the venue for Dieter's talk on Nabokov's Berlin, which was part of the museum's first conference on Nabokovian haunts, "Nabokov and Germany." A substantial crowd gathered, and, I think, the event was recorded by TV crews. Where is that footage now? What do we retain when the person is gone? Thanks to Dieter Zimmer's meticulousness and sense of duty, his impeccably maintained website—a treasure trove of Nabokoviana—features most of his latest work and is available to everyone. Although Dieter's loss is irretrievable, his legacy is alive and will keep sustaining and inspiring many scholars.