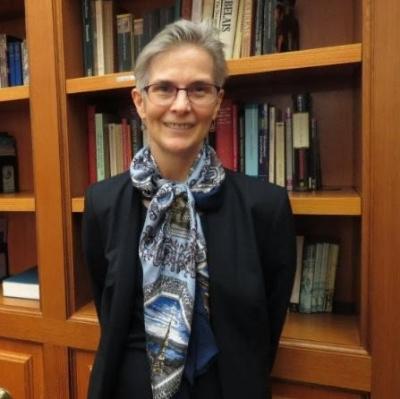 The Nabokov community mourns the loss of Deborah Anne Martinsen, distinguished Dostoevsky and Nabokov scholar. Dr. Martinsen's essay "Lolita as Petersburg Text" (Nabokov Studies 13 [2014/2015]) won, in 2017, The Donald Barton Johnson Prize for the best essay published in Nabokov Studies. Dr. Martinsen was 67 years old and battled pancreatic cancer. Our heartfelt condolences go out to her loved ones, Randall Butler, her husband, and Rory Butler, their son.

Deborah Anne Martinsen, Associate Dean of Alumni Education and cherished alumna of the Department of Slavic Languages (PhD 1989), died on November 28 at home in Washington Heights.  Our hearts go out to Randall Butler, her husband, and Rory Butler, their son.

Deborah was a vibrant force in Dostoevsky studies.  She leaves a corpus of books on Dostoevsky.  Surprised by Shame: Dostoevsky’s Liars and Narrative Exposure (2003), which was translated into Russian in 2011, explored the dynamics of shame—and guilt—in Dostoevsky’s work.  Together with Olga Maiorova, she coedited Dostoevsky in Context for Cambridge University Press.  Just this summer she put the finishing touches on Dostoevsky’s Crime and Punishment: A Reader’s Guide, to be published by Academic Studies Press.  And she was at work on Fyodor Dostoevsky: A Very Short Introduction for Oxford University Press.

Active in the International Dostoevsky Society from her graduate school days on, Deborah served as its President from 2007 to 2013.  She was in her element at its symposia, giving brilliant papers, and creating a community of Dostoevsky scholars that was international and intergenerational.  She had true gifts for connecting people, for drawing people into the fold, and for making them devotees of the Dostoevsky Society.  Scores of scholars are very grateful to her for this and for encouraging them to go on to publish in Dostoevsky Studies and elsewhere.

Deborah spoke, lectured, and gave workshops on Dostoevsky around the world.  She gave keynote addresses in Tokyo, Beijing, Copenhagen, Granada, and Naples, and papers at Dostoevsky’s summer retreat in Staraya Russa, back in Morningside Heights, and countless places in between.

A second focus was Nabokov studies.  Her “Lolita as a Petersburg Text” won the award for the best essay published in Nabokov Studies in 2016.  In conference papers and articles, she explored Nabokov’s fraught response to Dostoevsky and revealed his debt to an author he loved to disparage.

As an Adjunct Associate Professor in the Department of Slavic Languages, Deborah Martinsen taught courses such as “Dostoevsky and Nabokov” and “Narrative Dilemmas” that inspired students and sowed the seeds of future senior essays and dissertations.  A brilliant editor and critic, Deborah served on countless dissertation committees and enlivened the discussion at both the Department of Slavic Languages and Harriman Institute events: things won’t be the same without her there in the room with us.

Deborah began teaching Literature Humanities at Columbia when still a graduate student.  In the decades that followed, she carried on teaching it, trained others to teach it, and served as Associate Dean of the Core Curriculum.  She worked tirelessly to ensure that the tradition of the Columbia Core continues and evolves.  In 2011, she received the Wm. Theodore de Bary Award for Distinguished Service to the Core Curriculum.

In her work as Associate Dean of Alumni Education, she brought alumni back to their intellectual roots in the Core and masterminded ways for them to renew their love of learning and literature.  One of her last ventures for alumni, hatched in response to the isolation of the recent pandemic, was an online reading group devoted to Boccaccio’s Decameron, in which a group of friends tell each other stories while taking shelter from a plague. To help her lead this workshop, Deborah gathered a coterie of veteran Lit Hum instructors (all with PhDs from the Department of Slavic Languages).

Deborah will be greatly missed by the many colleagues, students, and friends she inspired and encouraged over the years and especially by those who walked with her in gardens in her neighborhood and around the world.  Her absence will leave a terrible void.  The Department of Slavic Languages is grateful for her legacy as a scholar and for the joy she brought to our community.