Introducing a new feature: read classic materials from the archives of the print version of The Nabokovian. Selected by the site's editors, contents will be featured free of charge and will vary quarterly. Full access to all of the print and electronic issues of The Nabokovian are available on this site to members of the International Vladimir Nabokov Society (IVNS). To join, please go here.

Our third feature is "Colloquy on Browning's Door" from the 34th issue (1995) of The Nabokovian.  Enjoy your reading!

I am very sad to hear that Dieter has passed away. He was one of the first admirers and commentators of Nabokov, one of the most dedicated scholars on his works, his biography,  his butterflies, plus a rigorous translator. The Nabokov community owes him a great deal and his name will remain attached to that of the author of Lolita, Pale Fire, and Ada. I have his annotated editions on my shelves and made an abundant use of them. 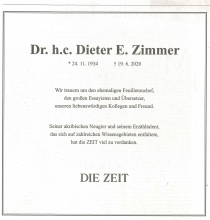